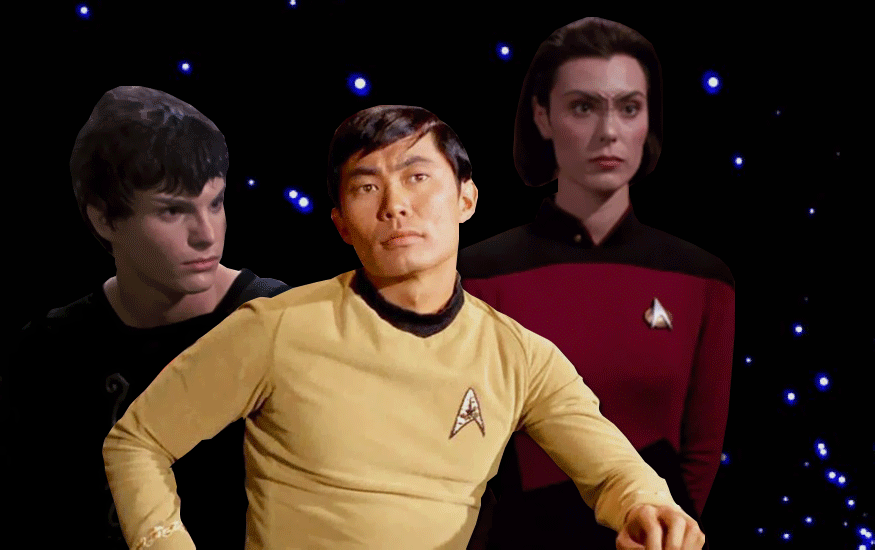 An assignation with Spock, Sulu and Ro

Members of the Enterprise will be beaming down to Birmingham's NEC in October for Destination Star Trek 2019.

The only official Star Trek event in Europe, DST features stars from more than 50 years of television space exploration, including the original series and the latest Discovery programmes, and all that came between.

The event takes place from 25-27 October 2019 and this year the special guests scheduled for appearances include Michelle Forbes, Stephen Manley and George Takei.

Takei began his Star Trek adventure as Sulu in Where No Man Has Gone Before, the second Star Trek pilot that finally sold the series. In that hour Sulu was said to be a mathematician but once the series went into weekly production he became the helmsman and a part of the bridge crew.

During the first season he managed to make a guest appearance on Mission: Impossible and, during the show's second season, took time off to film The Green Berets with John Wayne.

After Star Trek was cancelled in 1969, Takei did guest stints on many primetime series including Kung Fu, The Six Million Dollar Man, Miami Vice and a dual role on the original Hawaii Five-O. In 1972, he served as a California representative at the Democratic National Convention and in the autumn of 1973 he ran for mayor of Los Angeles. He didn't win the election, but it did cause a local TV station to stop running Star Trek shows until after the vote because his opponent felt his voice and image on TV every week created an unfair advantage.

Takei's many credits in the 1980s, 1990s and early 2000s include all the original series Star Trek features, MacGyver, Prisoners of the Sun, Kung Fu: The Legend Continues, Space Cases, Mulan, Batman Beyond, Futurama and Scrubs. And, of course, he reprised his role as Sulu for many Star Trek audio-novels and video games, as well as in the 1996 Voyager episode, Flashback. Along the way, he had an asteroid, 7307 Takei, named after him and in 1986 was honoured with a star on the Hollywood Walk of Fame.

In 2005 he created a media sensation when he came out to the press for the first time as a gay man, his newfound notoriety earning him guest spots on numerous TV shows, including Will & Grace, and sparking a huge renaissance in his career.

Manley is one of four actors, aside from Leonard Nimoy, who appeared as Spock in Star Trek III: The Search for Spock (1984), playing the 17-year-old regenerated by the Genesis planet.

He started acting in Days of our Lives in 1977 and went on to appear in a number of TV shows and movies before landing the role of Spock. More recently Manley has been seen in Nightwing: The Series, Southwest: the Series and Outlaws Chronicles: Hells Angels.

Forbes' steely on-screen persona has been a winning factor in many familiar roles but her portrayal of Ensign Ro Laren, the character that introduced the Bajorans to Star Trek, was her big break on screen.

After playing twins on the CBS soap opera The Guiding Light, Forbes first turned up in season four of The Next Generation in the episode Half a Life, as the Kaelonian Timicin’s aggrieved daughter Dara.

Forbes made such an impression in her one scene that when the producers created Ensign Ro she was foremost in their mind to play her.

In just eight appearances, she forged such a strong presence that when Deep Space Nine was conceived with a Bajoran first officer it was Ro Laren driving the idea. But Forbes declined the offer to pursue a variety of work in films instead of a seven-year TV show.

After Star Trek, Forbes starred opposite David Dukovney in the thriller Kalifornia and soon landed the role of chief medical examiner Julianna Cox on Homicide: Life in the Street for two seasons and a later TV movie. Among her many film credits are Dandelion, Escape from LA, American Girl, the second part of The Hunger Games: Mockingjay, and the comedy Highland Park.

Forbes, Manley and Takei will be available throughout the event in Birmingham for autographs and photo sessions and visitors to Birmingham will also be able to sit on the classic bridge of the Enterprise, or see how comfortable the last captain’s chair from Discovery is.

A host of genuine screen-used props and costumes will also be on display, including a recently acquired original phaser from the 1960s.

With panel discussions, character shoots and a host of vendors there's a huge amount going on at DST, making it a must event for Star Trek fans of all shapes and ages.