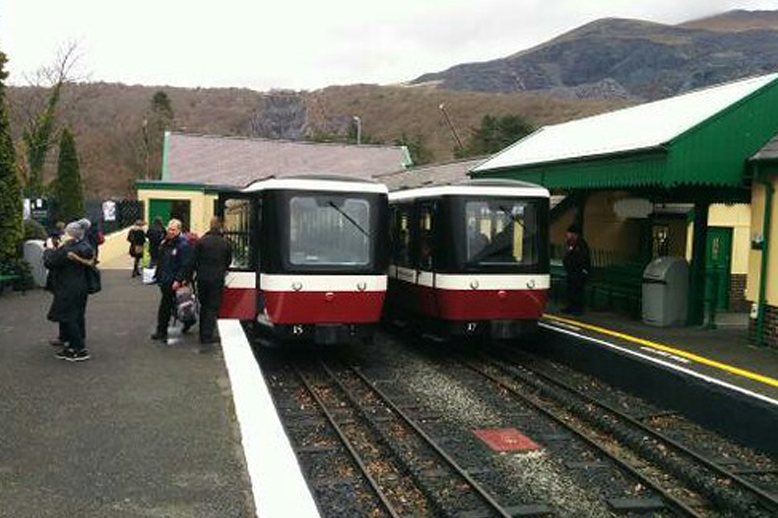 From Llanberis to the summit of Snowdon

At 1085m Mount Snowdon dominates the landscape of the Snowdonia National Park and the most comfortable way to reach the summit is via the Snowdon Mountain Railway.

With stunning scenery and awe-inspiring views , visitors have been travelling to Llanberis since 1896 to experience the unique journey to the summit.

From the moment the train leaves the station its journey upwards into the clouds begins. Leaving Llanberis station the track crosses the first of two viaducts over the Afon Hwch river and a wonderful view of the waterfall plunging into the gorge below can be seen.

As the train emerges into open ground travellers get a first glimpse of the peak of Snowdon as it pokes its head above the ridge to the right of the train.

The train soon passes Car Esgob, Bishops Field and the ruined Hebron Chapel before starting its summit ascent which offers spectacular views across the countryside before finally one of the world’s great panoramas is revealed at the summit.

Be aware though that the trip to the summit is very dependent on the weather, with high winds meaning trains can often be prevented from going all the way to the top. Weather conditions on the mountain vary greatly from those around Llanberis so it's best to check in advance.

The railway was first proposed by Sir Richard Moon, chairman of the London & North Western Railway, after a branch line from Bangor to Llanberis had been completed in 1869.

Initial Parliamentary Bills were met with stiff opposition from landowner George William Duff Assheton-Smith but plans for a railway from Porthmadog to the top of Snowdon and the opening of a narrow-gauge railway to Ryd Ddu on Snowdon’s south-west flank led to a significant loss of trade to the community of Llanberis.

This gave Assheton-Smith concern enough to eventually accept plans for the railway and Sir Richard got his way, with the formation of the Snowdon Mountain Tramroad and Hotels Company Ltd marking the go-ahead for one of the world’s great feats of engineering to begin in 1894.

More than 150 men with picks, shovels and dynamite built two viaducts, carved out a 100m cutting from solid rock, constructed several bridges and laid almost eight kilometres of track up a one-in-seven gradient to the top of a mountain – all in 14 months.

People flocked to the mountain to take in that hitherto unattainable peek from its summit and little has changed with thousands of visitors from all over the world still heading to Llanberis to experience one of the planet’s great rail journeys.

Of the original Swiss-built steam locomotives, four are still chugging up and down the mountain today and it has been calculated that No 2 locomotive, Enid, has covered a distance equal to four journeys to the moon and back since entering service in 1896.