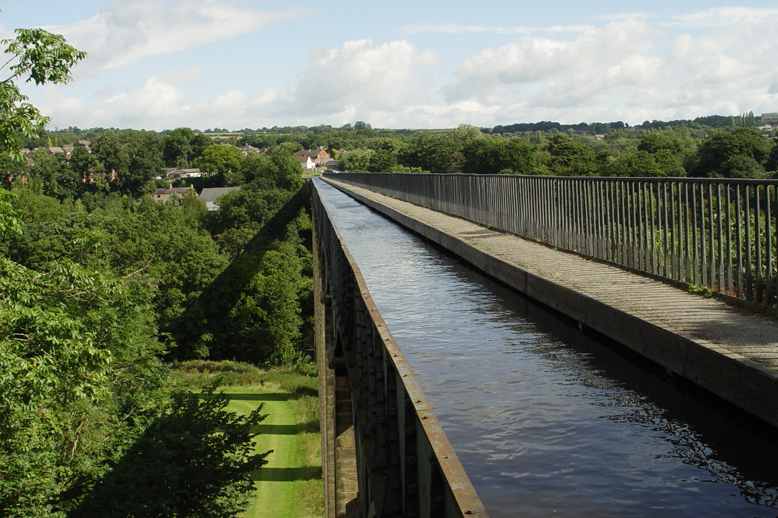 Standing tall above the River Dee

Built by architects Thomas Telford and William Jessop in 1805, Pontcysyllte’s cast-iron aqueduct stands on 18 pillars at a height of 30 metres above the River Dee.

Located on the Welsh-English border near the 18th century-road crossing at Pont Cysylltau, it is a navigable aqueduct that carries the Llangollen Canal across the river in north-east Wales.

The aqueduct was one of the first major feats of civil engineering undertaken by Telford, who was becoming one Britain's leading industrial engineers, although his work was supervised by Jessop, the more experienced canal engineer.

The work, which took about 10 years from design to construction, used ironwork supplied by William Hazledine from his foundries at Shrewsbury and nearby Cefn Mawr.

Officially opened to narrow boat traffic on 26 November 1805, the aqueduct is 307m-long, 3.7m-wide and 1.60m-deep and consists of a cast-iron trough supported 38m above the river on iron arched ribs carried on 18 hollow masonry pillars.

Commercial traffic on the canal greatly declined after a waterway breach near Newtown, Powys, in 1936 and by 1939 boat movements across the aqueduct to Llangollen had ceased.

The canal was formally closed to navigation under the London Midland and Scottish Railway Company Act of 1944.

But with the increase in leisure-boating traffic in the latter half of the 20th century, the former industrial waterway was renamed the Llangollen Canal by British Waterways in the 1980s and has since become one of the most popular canals for holidaymakers in Britain because of its aqueducts and beautiful scenery.

More than 200 years later, this vast landmark is still in service and is the oldest and longest navigable aqueduct in Great Britain and the highest in the world.

Not far to the east stands the Chirk Aqueduct, which was also designed by Telford and came into service in 1801.

The 21m-high aqueduct is built on 10 circular masonry arches but unlike Pontcysyllte there is no cast-iron trough carrying the water, instead the bed is formed by iron plates bolted together inside walls built of stone quarried locally at Pont Faen.