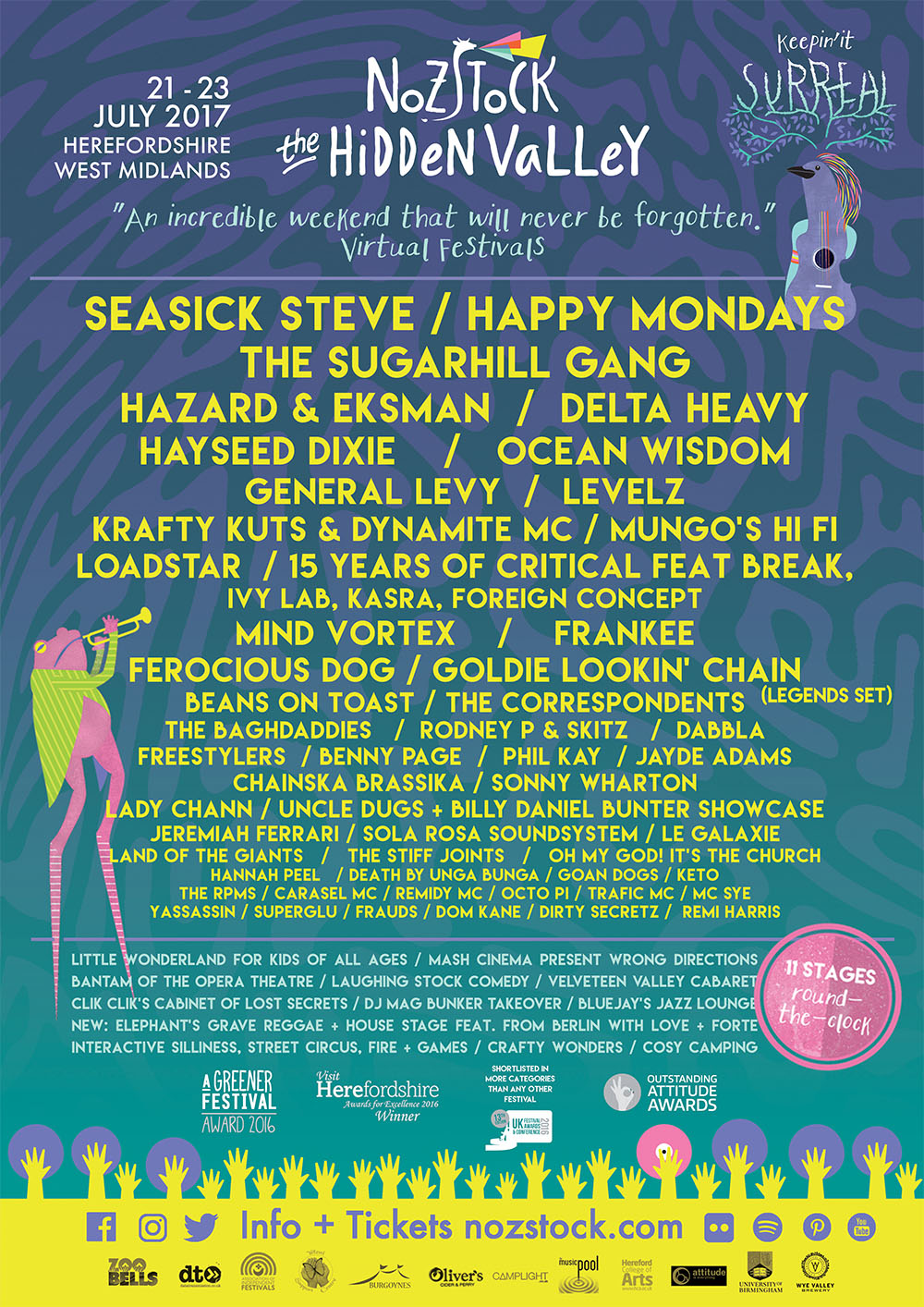 Something for everyone at Nozstock

This weekend an odyssey gets underway in rural Herefordshire – from 21-23 July – when Nozstock sets up camp on a beautiful working farm filled with fun, adventure, charm and a sprinkling of magic.

It started off in 1998 as a large barbecue at the Nosworthy family home in Bromyard but has since moved to a larger site on the nearby Rowden Paddocks Farm, where it plays host to more than 5,000 party people for a three-day long weekend of music and arts set in Herefordshire's rolling hills.

There are four live music stages, plus three DJ-based venues, where revellers can expect an eclectic mix of old and new talent, with the emphasis firmly rooted in urban beats and breaks.

Bridging the gaps between pop, ska, folk, funk, soul, indie, drum and bass, psytrance, house and a whole lot more, Nozstock is a playground for everyone from seasoned festival-goers to newbies setting out for their very first time. There's also plenty of interactive adventure and performances for kids of all ages,

At the heart of the festival site and set in the auditorium of the Orchard is Nozstock’s main stage, where a vibrant mix of bands from all over the world will pick up the pace with rock, indie, ska and hip-hop.

The Garden is the place to head for more experimental and unsigned acts spanning all genres from throbbing dance, funk, and hip-hop, to blues, rock and acoustic musings with performers such as The Lasting Days, CW Jones, Flamenco Thief, Verbal Highz, Snazzback and The Maitree Express.

Standing proud at the hilltop of the Dingle is the Bandstand, which hosts a variety of eclectic performers likely to appeal to music-lovers looking for a comfy sofa to chill with a beer in the hope of discovering something a bit different. This year the line-up includes Boy Azooga, Passion Bel Canon, Yassassin, Goa Dogs, Keto, Frauds and Beverly Shrills to name just a few of the acts on the bill.

And finally there's the Cabinet of Lost Secrets, where you can expect the unexpected with immersive performances and pop-up experiences that include big dance-floor funk and soul grooves, upbeat world rhythms and a touch of cutting-edge electronica from acts such as Lit FM, Mango Factory, Desert Boots, Galactic Funk Militia and Yusufla.

The Cubicles, Coppice and Elephant's Grave are the stages to swing by for pulsating basslines long into the night.