Symbol of transformation for town on the move

What an egg-stremely interesting idea... creating a giant golden egg as the symbol of the transformation of a town on the move to escape the threat of destruction.

The golden ovoid is a sauna, Solar Egg, created by Swedish "co-operative economic association" Riksbyggen and artistic duo Mats Birgert and Lars Bergstrom and installed in Sweden's most northerly town, Kiruna, which is being moved 3.2 kilometres to the east over the next 20 years to avoid ground subsidence caused by work at Europe's largest iron ore mine. 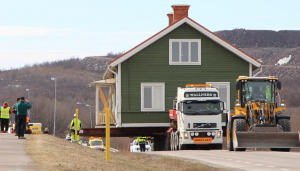 Located in Lapland, within the Arctic Circle, a third of the town's 18,000 residents and 21 of its old heritage buildings, are being relocated to the east where a new town centre, municipal buildings and about 3,000 new homes will be constructed.

The upheaval of the "millipede town" began in 2004 when its main source of employment for over a century began to pose a danger.
As the state-owned mining company LKAB dug for deeper deposits, cracks began appearing in populated areas of the town.

LKAB predicted the fractures would only get worse if it kept the 120-year-old mine open, but closing it would cost the town 4,000 jobs. So the company reached an agreement with the municipality to relocate 6,000 people who, according to its projections, live in areas affected by the cracks over the next two decades.

Preparations for the US$1 billion move, financed by LKAB, began in 2014 and so far more than 300 housing units have been constructed in "New Kiruna" and more than 400 residents have moved in.

Last year construction began on the new town centre and infrastructure, with the work expected to take two years. The plan is to eventually shut the old town centre and transfer to the new base... but a date has not been set for the switch.

But the move doesn't mean the old town will turn into an eerie, abandoned space. Although the mine poses a threat to building foundations and other underground structures, a park on top of the mine is believed to be a safe option, so that's the plan.

However, despite the huge effort and expense involved in establishing New Kiruna, officials acknowledge the mine might not keep the town economically afloat forever as modern technology gradually replaces miners. The number of employees today is only half what it used to be in the 1970s.

So efforts are being made to replace jobs in the town, with the tourism sector seen as an important part of that as it is a prime vantage point for viewing the Aurora Borealis (the northern lights), has wonderful scenery and an ice hotel. 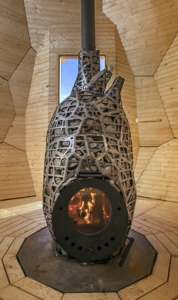 And cue the golden egg, which was commissioned by Riksbyggen as a "commemorative" social sculpture and symbol of new beginnings for the community.

The sauna's exterior consists of 69 golden reflective panels and the inside, which can accommodate up to eight persons, is heated by a heart-shaped wood-fired burner.

Since April 2017, Solar Egg, has gone on its travels to increase awareness about the project in Kiruna and has welcomed bathers in numerous stunning locations such as Bjorkliden, Paris, Stockholm, Gallivare and Copenhagen... causing quite a bit of interest in the process.

For their collaboration Riksbyggen, Bigert and Bergström were winners at the Swedish Arts and Business Awards last year and in 2017 Solar Egg won a German Red Dot design award, Swedish Building Award and other numerous international accolades.

Bigert and Bergstrom gained international prominence with their climate chamber designed for the World Expo in Lisbon in 1998 and in 2015 covered the peak of Sweden’s highest mountain, Kebnekaise, with an insulating coat to examine whether geo-engineering could help to slow glacial melting. Solar Egg shifts that focus to practical use and has done wonders to put Kiruna on the map as a tourism centre.

For more information about the Solar Egg visit the Riksbyggen website.