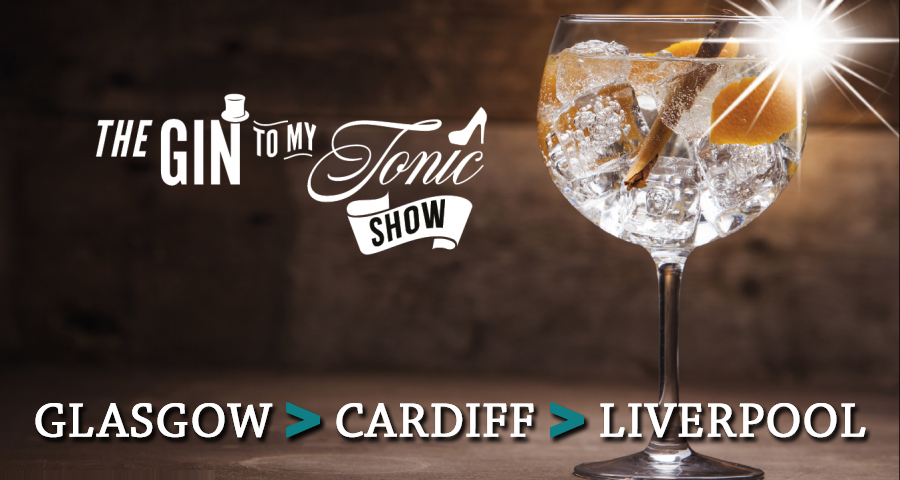 Getting giddy about juniper berries

It's a generally accepted fact that Russians consume the most vodka, but what nation consumes the most gin? Any ideas? Britain, the US, China?

Nope... the world's biggest gin consumer is in fact the Philippines, drinking almost half of the 60 million cases sold annually. More than 22 million cases of Ginebra San Miguel are sold, and while this gin accounts for 43 per cent of the gin market, most people outside the Philippines have never heard of it.

Another fact about gin is that it is simply flavoured vodka, with the key ingredient being juniper berries. For without the juniper berry, gin would just be vodka.

Juniper provides the characteristic pine flavour synonymous with gin and regulations state that regardless of the type of gin, juniper should be the predominant flavour, with the US government's definition stating it is a product obtained by original distillation from grain mash, or by re-distillation of distilled spirits, or by mixing neutral spirits, with or over juniper berries and other aromatics.

It goes on to state that its characteristic flavour must come from juniper berries and it must be bottled at not less than 80% proof (40% ABV), with gin produced exclusively by original distillation or by re-distillation being further designated as “distilled”. The EU dictates the minimum bottled strength is 37.5% ABV.

Under the heading ‘other aromatics' come things like coriander; citrus, such as lemon, lime, or grapefruit rinds; cinnamon; cucumber; anise; ginger; and licorice root.

So, when making gin, there really is quite a lot of scope in what flavours can be used, but juniper is a must... giving the clear, high-alcohol spirit its characteristic flavour, which is at its best in mixed drinks and cocktails, rather than neat. 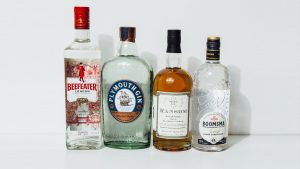 Geneva gin is the father of all gins, with its name ultimately derived from juniper's Dutch name, jenever. The original style of gin, it dates back to 16th-century Holland where the base grains were malted, giving it a more robust flavour.

Geneva gin distillers create a malt wine spirit, with the malted grains left to ferment for five days or so. They are then turned into a mash, which is similar to how whiskey is made. Different botanicals, including juniper, are added but the difference with London Dry gins is that Geneva gins are more malty, with cloves, caraway, ginger and nutmeg frequent additions.

London Dry originated in England but is produced all over the world and is most people's idea of gin, typically being what you get in a G&T or Martini. The juniper flavour in London Dry mellows through distillation with fresh citrus peels or dried peels often added to give a bright fresh flavour. The term 'dry gin' means no artificial flavourings are added, only those from the botanicals used in the distillation process.

Old Tom is a style that developed in Britain during the 18th century when it became common for people to make their own gin. It became known as bathtub gin, with licorice used as a sweetening agent after distillation.

Navy Strength gin evolved from the idea of "proof spirits", a term which originated in the 18th century when British sailors were given rations of rum. To ensure the rum had not been watered down, it was "proved" by dousing gunpowder in it, then tested to see if the gunpowder would ignite. If it did not, then the rum contained too much water and was considered to be "under proof". Likewise Navy Strength gin was bottled at 100° British proof (57.15% ABV), with those bottled below 57% or above 58% not covered by the definition. Gins exceeding 58% ABV are simply designated high-strength gins.

So, that covers the main styles of gin, but different production techniques have also evolved as technology has improved, with three basic methods used.

Pot-distilled gin represents the earliest form of production with the spirit traditionally produced by pot-distilling a fermented mash from barley or other grains, then re-distilling it with botanicals to extract the aromatic compounds. Due to the use of pot stills, the alcohol content of the distillate is relatively low... around 68% proof for a single-distilled gin or 76% proof for a double-distilled gin. Often aged in tanks or wooden casks, the method produces the more malty flavour associated with Geneva gin. 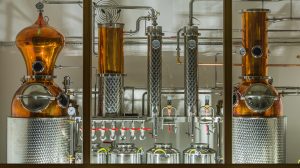 Column-distilled gin evolved following the invention of the Coffey still and is produced by first distilling high-proof neutral spirits from a fermented mash or wash using a refluxing still, such as a column still. The fermentable base can be derived from grain, sugar beets, grapes, potatoes, sugar cane, plain sugar, or any other agricultural material.

The highly concentrated spirit is then re-distilled with juniper berries and other botanicals in a pot still. Usually the botanicals are suspended in a "gin basket" placed within the head of the still, which allows hot alcoholic vapours to extract flavourings from the additives. This method yields a distilled gin or London Dry gin, depending on how the spirit is finished.

Finally compound gin is made by simply flavouring neutral spirits with essences or other "natural flavourings" without re-distillation.

And there you have it, base alcohol, juniper, other botanicals and boom... gin. Most commonly consumed with tonic water, with typical ratios being between one part gin to two to five parts tonic.

It's also the principal ingredient in a Martini, in which it is mixed 5:1 with vermouth, and in the Singapore Sling, which combines juniper’s pungent aromatics with those of cherry brandy, Cointreau, Benedictine, Angostura Bitters, lemon, pineapple and grenadine.

And one place where all this gin knowledge can be put to good use is at The Gin To My Tonic Festival, which brings together more than 100 different gins from across the UK and beyond to selected locations around the UK.

The festivals also feature a bar operating on a token system, with tokens costing £5 for a 35ml measure of gin, garnish and an appropriate mixer. With bottles of the gins also available for purchase at the festivals.

Additionally The Gin To My Tonic Show also takes place annually at three locations... with Glasgow, Cardiff and Liverpool hosting events in 2019 that offer a different experience to the traditional festivals. No other festival brings together the wonderful world of gin in quite the same way, so for those looking to embark on an exciting journey of gin discovery, complete with unlimited tastings, this is most certainly the place for you!

There are well-stocked gin and cocktail bars, as well as cocktail-making masterclasses, blind-taste challenges, presentations from distilleries, tonic and garnish tutorials, and theatrical bartender performances. But the main attraction is the large variety of distilleries, artisan gin makers and tonic manufacturers, which creates what can only be described as gin heaven.

Finally, first up on The Gin To My Tonic schedule is a special tasting event aboard the SS Great Britain in Bristol from 1-2 March. Five 35ml measures of gin, five premium tonics, five different garnishes, and bar snacks... not a bad way to spend an evening.

For more information about the The Gin To My Tonic Festival venues and other events visit the website.