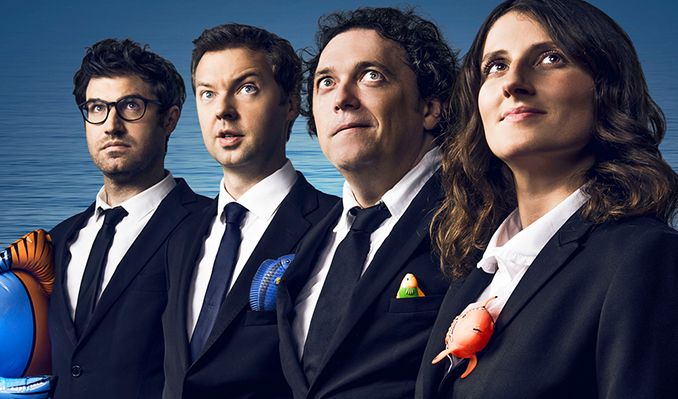 Few could have predicted what a live draw it would become when the podcast No Such Thing as a Fish launched five years ago.

A spin-off from the BBC panel game quiz QI, featuring the show's researchers impressing each other with surplus facts that couldn't be crammed into the television programme, it is about to embark on a fourth UK live tour after taking to the internet for the first time in March 2014.

The podcast was named one of iTunes' Top 10 most downloaded of 2016 and gets millions of downloads each week, even being transformed into the spin-off TV series No Such Thing as the News.

The tour gives live audiences the chance to join Dan Schreiber, Andrew Hunter Murray, Anna Ptaszynski and James Harkin as they serve up their pick of bizarre and informative tidbits, with their fact-filled tomfoolery coming to all corners of the British Isles for their most "northerly, southerly, easterly and westerly" performances in the UK and Ireland to date.

The shows begin up north in Scotland on 28 February 2019 at Aberdeen's Tivoli Theatre, followed by Glasgow's King's Theatre on 1 March.

Then they're off to the Cambridge Corn Exchange on 3 March and Uffculme in Devon on 8 March, followed by Queen's Theatre in Barnstaple and the Regal Theatre, Redruth.

The shows hit St David's Hall in Cardiff on 13 March, followed by the Eventim Apollo in Hammersmith, the Tyne Theatre and Opera House in Newcastle, and the The Lowry in Salford Quays.

On 22 March the team are in Norwich at the Theatre Royal, followed by Birmingham Town Hall, the King's Theatre in Edinburgh and Sheffield City Hall on 28 March.

The tour finishes with dates in Dublin on 29 March, Brighton 2 April and Oxford 5 April.

For more information about the podcast and the live tour visit the No Such Thing as a Fish website.