Creator of the iconic Baker Street

It was eight years ago today that the creator of one of the most iconic songs of a generation, Gerry Rafferty, passed away after a long battle with liver disease at the age of 63.

An incredibly distinctive piece of work, there's no doubting it's Baker Street blasting from the radio from the moment the growling saxophone reverberates around the room.

Rafferty had written the song with an instrumental break, but didn't have a specific instrument in mind. Hugh Murphy, who produced the track, suggested a saxophone and the result was Raphael Ravenscroft's mesmerising solo.

In the three years following the demise of his previous band Stealers Wheel, Rafferty had been unable to release material due to disputes about recording obligations and his friend's Baker Street flat in London had been a convenient place to stay as he tried to extricate himself from his contracts. 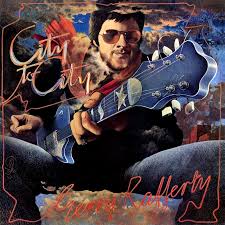 The album City To City was the Scottish singer's first release after the resolution of the legal problems and Baker Street was the first single released off the album. The most sentimental of all Rafferty's songs, Baker Street is about a man who dreams of owning a house and living away from his neighborhood, but who struggles to achieve that goal because he drinks to forget what he doesn't have, never realising he's a rolling stone with no direction.

Born into a working-class family in Paisley, Scotland, on 16 April 1947, Rafferty's mother taught him Irish and Scottish folk songs as a boy; with later influences coming from The Beatles and Bob Dylan.

He began his career as a member of the mid-1960s folk-rock group the Humblebums, which also included future comedy star Billy Connolly. After they disbanded in 1971, he recorded his first solo album, Can I Have My Money Back?

In 1972 he formed Stealers Wheel with his old friend Joe Egan and recorded three albums with the American songwriters and producers Jerry Leiber and Mike Stoller. Although the group had a huge hit with Stuck in the Middle with You, which earned critical acclaim as well as commercial success, they were beset by legal wranglings and split in 1975. Lesser Top 50 hits included Everyone's Agreed That Everything Will Turn Out Fine and Star.

Then in 1978 Rafferty recorded his second solo album, City To City, and according to his producer Murphy had to beg the record label, United Artists, to release Baker Street as a single. 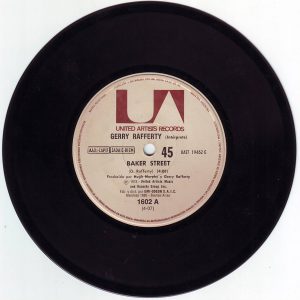 It reached No 3 in the UK and No 2 in the US and won the singer the Ivor Novello Award for Best Song Musically and Lyrically. The album sold more than 5.5 million copies, toppling the Saturday Night Fever soundtrack in the US on 8 July 1978.

In October 2010 the song was recognised by BMI for surpassing five million performances worldwide and went gold on two occasions... on 1 April 1978 and 22 July 2013.

Stuck in the Middle With You has received over four million plays worldwide and another City To City single, Right Down The Line, has had more than three million plays.

In a 2003 interview with The Sun (Scotland), Rafferty said: "Baker Street still makes me about £80,000 a year. It's been a huge earner for me. I must admit, I could live off that song alone."

Rafferty reputedly loathed the 1992 dance cover version of Baker Street by Undercover, but it earned him another £1.5 million, selling around three million copies in Europe and America.

Subsequent albums, such as Snakes and Ladders (1980), Sleepwalking (1982) and North and South (1988), fared less well, perhaps due partly to Rafferty's longstanding reluctance to perform live, which he felt uncomfortable with.

Rafferty released two further albums in the 1990s in what musician Tom Robinson later described as "a major return to form". On a Wing and a Prayer (1992) reunited him with his Stealers Wheel partner Egan on several tracks. It included three tracks co-written with Rafferty's brother Jim, also a singer-songwriter, who had been signed to Decca Records in the 1970s. Rafferty recorded a new version of his Humblebums song Her Father Didn't Like Me Anyway on the album Over My Head (1994). These were the last two records Rafferty produced with Murphy, who died in 1998.

By the end of the 1990s, new technology meant Rafferty could distance himself from the conventional music industry and work entirely on his own terms. Now based in London, he employed sound engineer Giles Twigg to assemble a mobile recording studio and with his help recorded the album Another World (2000). Through his company Icon Music, Rafferty promoted and sold the album independently.

In all Rafferty released nine albums from 1971-2000, plus eight compilation works culminating in Life Goes On in 2009 and Gerry Rafferty & Stealers Wheel: Collected in 2011.