Get the drift about continents

The way we look at the world changed 107 years ago today when Alfred Wegener presented his theory on 'continental drift' to the German Geological Society, putting forward the notion that the Earth's continents had once been united in a single super land mass named Pangaea that had drifted apart over geological time.

Born in Berlin on 1 November 1880, Wegener was an accomplished natural scientist in the fields of astronomy and geology, whose primary research interest was in the relatively new field of meteorology.

He had an adventurous spirit and one of his passions was arctic exploration, particularly to Greenland where he took part in several expeditions. On his first trip from 1906-08 he was appointed as the official meteorologist for a Danish scientific expedition charting the coastline of the island’s unexplored north-east. During the expedition, which claimed the lives of three members due to exposure, Wegener made his mark by building Greenland’s first meteorological station and taking a large number of atmospheric readings using kites and balloons.

Returning to Germany in 1908, he became an associate professor in meteorology at the University of Marburg, where he published his first book, Thermodynamics of the Atmosphere, and also developed the idea that would bring him both anguish and long-lasting fame.

Wegener noticed the large landmasses of the Earth almost fitted together like a big jigsaw puzzle, with the continental shelf of the Americas closely matching Africa and Europe, and Antarctica, Australia, India and Madagascar fitting next to the tip of southern Africa. He also used geological evidence to back up his theory that Africa and South America were at one time connected.

His collection of maps, rock formations and fossil records clearly linked South America's eastern continental shelf with Africa's western continental shelf, with the fossils of a small lizard from the Paleozoic era (about 270 million years ago) appearing in only these two places on Earth.

The Mesosaurus was a freshwater animal that would have been incapable of crossing the Atlantic Ocean but its fossil remains were found only in southern Africa and eastern South America, suggesting the shelves of the two continents must have fitted together in the geological past. 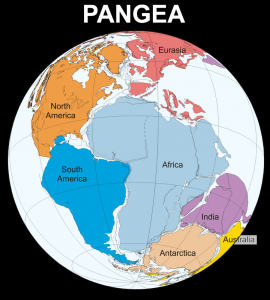 Wegener also identified rocks of the same type and age on both sides of the Atlantic Ocean, which he believed had formed side by side. The Appalachians of the eastern United States and Canada, for example, are just like mountain ranges in eastern Greenland, Ireland, Great Britain and Norway. Wegener concluded that they formed as a single mountain range that was separated as the continents drifted apart.

Fossils of the seed fern Glossopteris, rock deposits left by ancient glaciers, ancient coal seams and coral reefs all added to the evidence that the continents had once been linked.

But although his evidence was sound, most geologists at the time rejected his hypothesis arguing there was no way to explain how solid continents could move through solid oceanic crust. Wegener’s idea was nearly forgotten until technological advances presented even more evidence that the continents moved and gave scientists the tools to develop a mechanism for Wegener’s drifting continents... now known as plate tectonics.

By 1915 the theory had developed into a book, Die Entstehung der Kontinente und Ozeane, where Wegener drew together evidence from various fields to advance the theory that there had once been a giant continent, which he named 'Urkontinent' (German for 'primal continent' and analogous to the Greek 'Pangaea', meaning 'All Lands' or 'All Earth').

Expanded editions during the 1920s presented further evidence, with his first English edition published in 1924 as 'The Origin of Continents and Oceans', a translation of the 1922 third German edition.

In 1924 Wegener was appointed to a professorship in meteorology and geophysics in Graz, where he concentrated on physics and the optics of the atmosphere as well as the study of tornados. Scientific assessment of his second Greenland expedition continued to the end of the 1920s.

In 1929 he embarked on his third trip to Greenland, which laid the groundwork for an expedition the following year and included a test of an innovative, propeller-driven snowmobile.

But a year later, on an unknown day in mid-November, Wegener died at the age of 50 during his fourth expedition to Greenland, probably from a heart attack.

The 14 participants in the expedition under his leadership were to establish three permanent stations from which the thickness of the Greenland ice sheet could be measured and year-round Arctic weather observations made. Wegener felt personally responsible for the expedition's success, as the German Government had contributed heavily to its funding.

Success depended on enough provisions being transferred from the expeditions West camp to Eismitte ('mid-ice') for two men to winter there, and this was a factor in the decision that led to his death. Owing to a late thaw, the expedition was six weeks behind schedule and, as summer ended, the men at Eismitte sent a message that they had insufficient fuel and so would return on 20 October.

On 24 September, although the route markers were by now largely buried under snow, Wegener set out with 13 Greenlanders and his meteorologist Fritz Loewe to supply the camp by dog sled. During the journey, the temperature reached −60°C and Loewe's toes became so frostbitten they had to be amputated.

Twelve of the Greenlanders returned to West camp and on 19 October the remaining three members of the party reached Eismitte. There being only enough supplies for three people, Wegener and Rasmus Villumsen took two dog sleds and made for West camp.

Taking no food for the dogs, they killed the animals one by one to feed the rest until they could run only one sled. While Villumsen rode the sled, Wegener used skis but they never reached the camp... Wegener died and Villumsen was never seen again. The expedition was completed by Wegener's brother, Kurt.

In May 1931 he discovered his brother’s grave, which Villumsen had marked with a pair of skis, halfway between Eismitte and West camp.

He and other expedition members built a pyramid-shaped mausoleum in the ice and snow and Wegener’s body was laid to rest in it. The mausoleum has now, with the passing of time, been buried under Greenland’s ice and snow.

Today, scientists think that several super continents such as Pangaea have formed and broken up over the course of the Earth’s lifespan. These include Pannotia, which formed about 600 million years ago, and Rodinia, which existed more than a billion years ago.