Live tour kicks off in Nottingham

It's not everyone's cup of tea, but there's no doubting that the X Factor has huge appeal and has launched the careers of many talented artists who would otherwise never have had the opportunity to live their dreams. 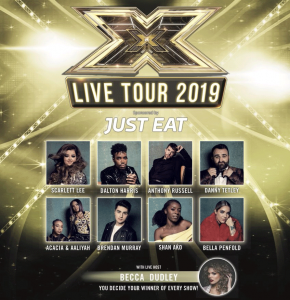 In 2018 Dalton Harris, Scarlett Lee, Anthony Russell, Danny Tetley, Acacia & Aaliyah, Brendan Murray, Shan Ako and Bella Penfold were the contestants who shone out in the ITV talent hunt and later this week they'll be performing in Nottingham, the first stop on this year's X Factor Live Tour.

Winner 24-year-old Harris, travelled over from Kingston to take part in the show having also been a winner on Digicel Rising Stars, the Jamaican version of the X Factor when he was 16. He captured the most votes ahead of Lee and Russell in the 2018 final, going on to top the iTunes chart with his winner's single, The Power Of Love, featuring James Arthur.

Since it began 14 years ago, the X Factor Live Tour has thrilled more than three million people and is one of the UK’s most successful annual arena tours. Hosted by presenter Becca Dudley, it kicks off in Nottingham on the 15 February, before travelling across the UK and Ireland, with stops in Aberdeen, Belfast, Birmingham (matinee), Bournemouth, Brighton, Cardiff, Dublin, Glasgow, Hull, Leeds, Liverpool, London (matinee and evening), Manchester (matinee), Newcastle and Sheffield.

For more information about the X Factor Live Tour visit the website.