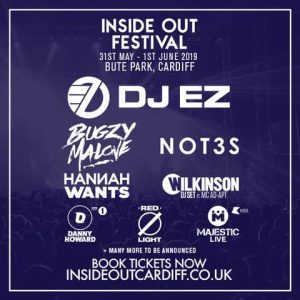 Cardiff will be turned inside out again this year, but it'll be happening a bit earlier in 2019 and for two days instead of one.

Returning to Cardiff's Bute Park for a fourth year, Inside Out Festival will run from 31 May to 1 June rather than in September and for the first time it's a two-day event, with Not3s and Bugzy Malone headlining on Friday and DJ EZ on Saturday.

Jamaican dance-hall superstar Sean Paul makes a special guest appearance on Friday as well, with other acts on the bill including Wilkinson, Hannah Wants, Redlight, Danny Howard and Majestic, plus many more to be announced soon.

For tickets and more information about Inside Out Festival visit the website.