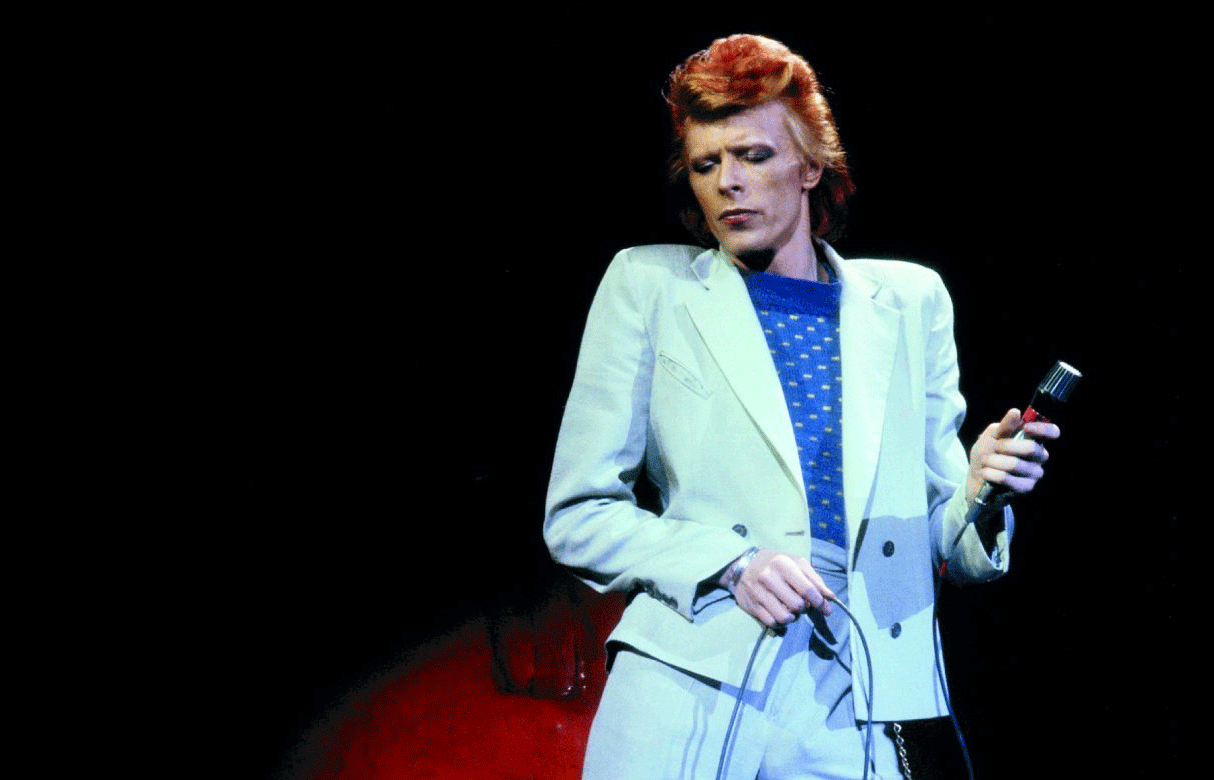 Genius of the Capricorn two

If you're the 'King of Rock and Roll' you're bound to have inspired a few people with your music, but to shape-shifting British rock icon David Bowie, Elvis Presley meant a whole lot more.

The pair were both Capricorns, born 12 years apart on 8 January. If they were still with us Bowie would be 72 today... Presley 84.

To a lot of young men growing up in Britain in the 1960s, Presley was the man to follow... and Bowie was along for the ride.

Born David Robert Jones in Brixton in 1947, Bowie was heavily influenced by Presley and first discovered the power of music when he saw his cousin get up and dance to Elvis’ 1956 recording of Hound Dog.

The family had moved to Bromley and by the end of the following year, Bowie had taken up the ukulele and tea-chest bass, begun to participate in skiffle sessions with friends, and had started to play the piano.

At Bromley Technical High School he studied art, music and design, and after his half-brother Terry Burns introduced him to modern jazz, his enthusiasm for players such as Charles Mingus and John Coltrane led to his mother giving him a Grafton saxophone in 1961.

He was soon receiving lessons from baritone saxophonist Ronnie Ross but had a serious eye injury at school in 1962 which left him with faulty depth perception and a permanently dilated pupil which later became one of Bowie's most recognisable features.

Despite this altercation with his friend George Underwood, the pair remained on good terms with Underwood going on to create the artwork for Bowie's early albums.

That year Bowie formed his first band at the age of 15, called the Konrads. Playing guitar-based rock and roll at local youth gatherings and weddings, the Konrads had a varying line-up of between four and eight members, Underwood among them.

Bowie left technical school the following year and, frustrated by his band-mates' limited aspirations, joined the King Bees, writing to washing-machine entrepreneur John Bloom inviting him to do for the King Bees "what Brian Epstein has done for the Beatles, and make another million". Bloom didn't respond to the offer, but his referral to Leslie Conn led to Bowie's first management contract.

Conn quickly began to promote Bowie. But the singer's debut single, Liza Jane, credited to Davie Jones with the King Bees, was not a success and Bowie quit the band less than a month later to join the Mannish Boys, another blues outfit.

Their cover of Bobby Bland's I Pity the Fool was no more successful than Liza Jane, and Bowie soon moved on again to the Lower Third, a blues trio strongly influenced by The Who.

His contract with Conn at an end, Bowie remained with the Lower Third but teamed up with new manager, Ralph Horton, who soon witnessed his switch to yet another group, the Buzz, which resulted in the singer's fifth unsuccessful single release.

Still with the Buzz, Bowie also joined the Riot Squad, with Ken Pitt, introduced by Horton, taking over the management duties.

Renaming himself after 19th-century American pioneer James Bowie, and the knife he popularised, to avoid confusion with Monkees' lead singer Davy Jones, Bowie emerged as a solo singer-songwriter but his April 1967 single, The Laughing Gnome, also failed to chart. His album debut, David Bowie, released six weeks later met the same fate. It was his last release for two years.

His return to recording brought the science-fiction single that marks the real beginning of his career, with Space Oddity reaching the Top 10 in Britain. But his first album of note, The Man Who Sold the World (1970), didn't turn him into a household name... that came after his move to Presley's record label RCA and his 1971-album Hunky Dory. 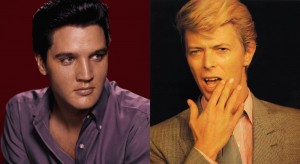 Under RCA's wings, Bowie hit on the attractively post-modern notion of presenting his chameleonism as an identity, rather than the lack of one, and he reached the peak of his success with his Ziggy Stardust stage show to promote, The Rise and Fall of Ziggy Stardust and the Spiders from Mars (1972), his flamboyant costumes and androgynous appearance becoming an iconic part of his image.

Presley's influence on Bowie had much to do with this showmanship and that year the label brought the two together at an Elvis concert at Madison Square Garden.

Bowie, his wife Angie and guitarist Mick Ronson were flown to New York in the middle of the Ziggy tour to meet Presley. Bowie arrived at the show straight off the plane and in full Stardust glamour.

In a 1996 interview he recalled, "I came over for a long weekend. I remember coming straight from the airport and walking into Madison Square Garden very late. I was wearing all my clobber from the Ziggy period and had great seats near the front. The whole place just turned to look at me and I felt like a right idiot. I had brilliant red hair, some huge padded spacesuit and those red boots with big black soles. I wished I’d gone for something quiet, because I must have registered with him. He was well into his set.”

Bowie had arrived in New York straight from a gig on the Thursday at the polytechnic in Middlesbrough, having dashed down to London afterwards to board the plane. He caught Presley's gig on the Friday night and was back in Britain for another show on Saturday.

By the time Presley's concert was over, all the RCA executives had had the opportunity to inspect Bowie, with the job falling to Dennis Katz to apologise for the fact the label had not been able to engineer a way for him to meet Presley.

Bowie was extremely disappointed, later recalling, "I literally saw him between gigs. I absolutely had to see him before anything happened to him. He was pretty good at that time."

Considered one of the most influential musicians of the 20th century, acclaimed by critics and musicians, Bowie's career was marked by reinvention and visual presentation, with his music and stagecraft having a significant impact on popular music.

During his career as a singer, songwriter, producer and actor, his record sales - estimated at 140 million albums worldwide - made him one of the world's best-selling artists. In the UK he was awarded 10 platinum album certifications, 11 gold and eight silver, and released 11 number-one albums. In the US he received five platinum and nine gold certifications. He also appeared in more than 20 films including August (2008), The Prestige (2006), Everybody Loves Sunshine (1999), Labyrinth (1986), Into the Night (1985), The Hunger (1983), Merry Christmas Mr Lawrence (1983), Just a Gigolo (1978) and The Man Who Fell to Earth (1976).

Throughout the 1990s and 2000s he continued performing and experimenting with musical styles, including “industrial” and “jungle” and remained actively involved with music until he died of cancer on 10 January 2016.

The searching, jazz-infused Blackstar (2016) was released two days before he passed away. In his final years he also co-wrote the musical Lazarus (premiered 2015), which was inspired by The Man Who Fell to Earth, and he was the subject of a blockbuster art exhibition, David Bowie Is (opened 2013).

Black Star had been the working title for Presley's 1960 Western, Flaming Star, in which "the King" gave one of his best acting performances as the mixed-blood Pacer Burton. A song was recorded by Presley to be used as the theme song, but was later re-recorded as Flaming Star using the same words and melody.