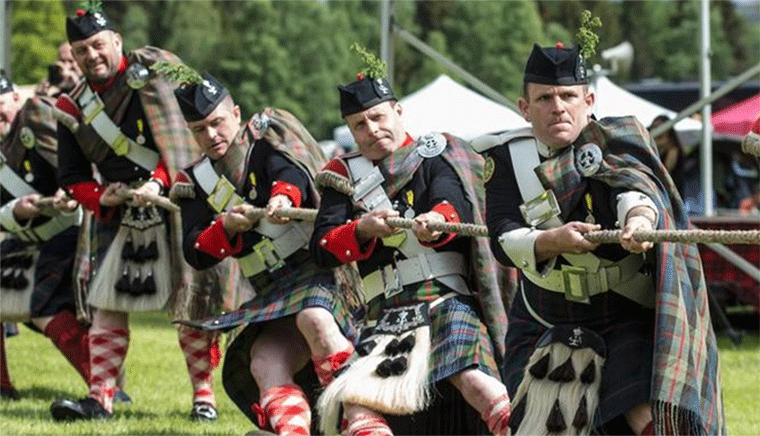 There are many ways in which Scottish culture differs from that of the rest of the British Isles, but perhaps nothing better sums up those differences than the Highland Games... Scotland's way of celebrating its age-old artistic and athletic traditions.

Some believe the games originated as a clan chieftain's way of choosing his best bodyguards and the fittest fighters... but not all his requirements were warlike, with musicians and dancers important for the prestige of his household, good runners vital as couriers and a range of entertainers important to amuse the clan during the winter evenings.

Many events still held at today's games use items that would have been part of everyday life in the Highlands of old, such as round stones from river beds which would have provided the original shot-putts and a Scots pine trunk shorn of its branches which is still the caber used today.

The Highland Games season runs from the end of May to mid-September every year and there are about 60 members of the Scottish Highland Games Association, the governing body of traditional Highland Games, with a number of associated members from overseas.

All SHGA games are traditional with a full range of activities in and around the arena such as the heavy events (hammer throwing, tossing the caber, throwing the hammer, the shot) through to the light events (running, cycling, tug of war, highland dancing, solo piping). All these events ensure a wonderful sound and atmosphere with each of the games offering a slightly different mix to preserve the uniqueness of each occasion.

The Highland Games range from small community events to larger occasions, with the Braemar games attracting more than 10,000 spectators. 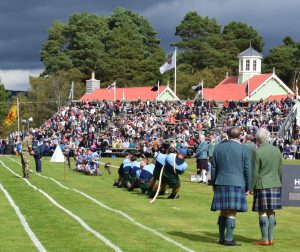 While there have been gatherings of one sort or another at Braemar since the days of King Malcolm Canmore, 900 years ago, the gathering in its present form dates back to 1832 and is organised by the Braemar Royal Highland Society.

Since 1848, the gathering has been attended regularly by the reigning monarch and members of the Royal Family, with the foot races being some of the oldest organised races in the world, having been staged on a regular basis by the same body since 1832.

The gathering is always held on the first Saturday in September at the Princess Royal and Duke of Fife Memorial Park... which is also home to the recently-established Highland Games Centre, established to tell the unique story of the gathering and the BRHS through objects, documents and costumes dating back to the first games.

Housed in The Duke of Rothesay Highland Games Pavilion, the stunning building was unveiled by The Queen in September last year and is named in honour of Prince Charles, Duke of Rothesay, a keen supporter of the project through his charity The Prince’s Foundation.

The pavilion, which opens to the public on 15 March 2019, incorporates a gallery, archive, cafe, shop and an exhibition hall, which documents the living traditions of the Highland Games, focusing on the Braemar Gathering and its long-standing royal connections which began with Queen Victoria.