Yesterday marked the 70th anniversary of the death of one of Britain's greatest racing pioneers, Sir Malcolm Campbell.

Born in Chislehurst, Kent, Campbell passed away on 31 December 1948 at the age of 63, having held the world speed records on land and on water at various times during the 1920s and 1930s, a feat also later achieved by his son Donald.

A pilot in the Royal Flying Corps during World War I, Campbell concentrated on automobile racing after the war and established world land-speed records on nine occasions between 1923-35. On September 3, 1935, at the Bonneville Salt Flats, Utah, his 'Bluebird' car was timed at 301.13 miles (484.62 km) per hour, the first officially clocked land-vehicle performance exceeding 300 miles (483 km) per hour. 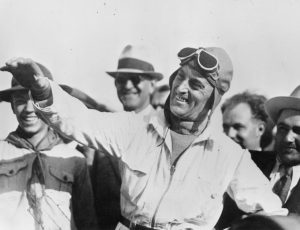 Campbell was educated at Uppingham School in Berkshire and his first job was at Lloyd's Corporation of Underwriters, where he made a considerable fortune by offering insurance for newspapers against libel actions. He made his first flight in 1909, in an aircraft he had built himself in a disused barn. At its first attempt, it crashed; but he rebuilt it and it flew for a hundred yards, making him one of the very first Britons to fly.

His first motor race at Brooklands, near Weybridge in Surrey, had taken place the previous year and in 1910 he bought a Darracq car which had won the Vanderbilt Cup in America and which could reach 100 mph.

Because Maurice Maeterlinck's play "The Blue Bird" was on at the Haymarket Theatre at the time, Campbell named his car "Bluebird" and painted it that colour. It won at Brooklands and all his future vehicles were given the same name.

At Brooklands in 1912 he suffered the first of several injuries when Bluebird lost its front and back wheels on the "off" side almost simultaneously. Campbell had the presence of mind to wrench the car to the edge of the track and to put the hubs on the edge of the concrete. In this way, he managed to keep the car upright and to finish the course, coming fourth.

When World War I broke out he served as a dispatch rider before being commissioned in the Royal West Kent Regiment, then transferring to the Royal Flying Corps as a ferry pilot; later, a flying instructor. After the Armistice, he resumed his motor-racing career and in 1923 at Pendine Sands in Carmarthenshire, Wales, he was the first man to reach 150 mph. At Daytona Beach in Florida he raised this to 206, then 246 mph.

He was knighted in 1931 having already received the MBE for his service in World War I and in the General Election of 1935 he contested Deptford, in south-east London, as a Conservative, but was defeated.

In 1938, his novel, "Salute to the Gods" was filmed by MGM as "Burn 'Em Up O'Connor" with Dennis O'Keefe in the title role; and, in 1979, three decades after his death, the BBC dramatised his life in a play called "Speed King", with Robert Hardy in the title role.

Campbell died after a series of strokes in 1948 in Reigate, Surrey, aged 63. He was one of the few land speed record holders of his era to die of natural causes and his achievements in different vehicles made him internationally famous.