The younger half of the duo that helped transform pop music in the 1960s, Phil Everly passed away in January 2014, but five years on the music he created with elder brother Don is still selling out theatres across the UK, with the Walk Right Back stage show about to enter it's second year on the road after a sell-out tour in 2018 that followed its West End run.

The story of one of the most successful duos of all time, Walk Right Back charts the brothers’ rise from a humble country-family upbringing to the biggest act the world had ever seen and features hits such as Bye Bye Love, Wake Up Little Susie, All I Have To Do Is Dream, When Will I Be Loved, Bird Dog and Cathy’s Clown.

Born into a musical family, Don and Phil first performed as part of their parents’ country music act then moved to Nashville, Tennessee, to work as songwriters, taking up the themes of teenage love and disappointment that became the staple diet of the emerging pop stars of the period. In 1957 they signed with Cadence Records and had their first big success that year with Bye Bye Love.

Phil, born on 19 January 1939, was almost exactly two years younger than Don, born 1 February 1937, but the boys’ parents brought them up as though they were twins. Both attended high school at Shenandoah, Iowa, where their parents had a radio breakfast show on which the boys sang from childhood.

They never fully embraced rock and roll, but their breezy harmonies influenced many of the stars who followed them, including The Beatles, The Beach Boys, Simon and Garfunkel, and The Byrds... groups whose popularity started to take off as that of the Everlys waned.

Sales in the United States slowed to a trickle after 1962, and, even though the duo maintained a large and loyal audience in Britain, their reign in the charts all but ended after 1965, with personal problems (including Don's addiction to amphetamines) wearing away at the pair and in 1973 they broke up during a concert at the John Wayne Theatre in Buena Park, California. 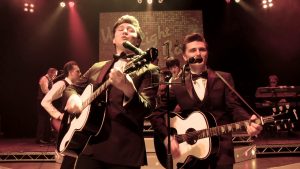 In the two-hour show Walk Right Back, Everly Brothers International Fan Club favourites Luke and Aaron Wilson star as the iconic brothers, with producer Ollie Gray stressing the importance of making the right choice for the lead roles.

"Casting was a big challenge as we felt it a must to have siblings playing Don and Phil, but after a long search we spotted two young brothers who were already honing their own tribute to the Everly Brothers," he said. "We were struck not only by their vocal blend but also their uncanny resemblance to Don and Phil Everly."

Director Peter John Jackson added: "The Everly Brothers were an original and unique act that had a sound like nothing else. Their harmonies were so tight that every group wanted to emulate them. Before that there was a singer, a band and backing vocals, the Everlys entwined all of them and created 'the harmony group'."

The first show in 2019 is at the Playhouse in Weston-super-Mare on 2 April, with the final date on 23 June at Glasgow's Theatre Royal.

In 1961 Phil and Don joined the US Marines, serving for about six months, and embarked on a European tour afterwards, when Don’s addiction to amphetamines first began to seriously affect his career. Twice in 12 hours while performing in London he was carted off to hospital, unconscious and he was flown back to the United States amid stories he had been struck down by food poisoning or a nervous breakdown. Phil had to finish the tour alone.

From then until their split in 1973 they performed together only occasionally, although they continued to record, moving to Warner Bros then RCA. After the break-up they worked apart, making solo recordings. Phil released his first solo record, Star Spangled Banner, in 1973, to modest acclaim, and followed up with Phil’s Diner (1974) and Mystic Line (1975). He wrote Don’t Say You Don’t Love Me No More for the hit Clint Eastwood film Every Which Way But Loose (1978), performing it in duet with Eastwood’s co-star, Sondra Locke. He also wrote One Too Many Women In Your Life for the sequel, Any Which Way You Can (1980), in which he also made a cameo appearance.

In 1983 he released the solo album Phil Everly. The track She Means Nothing To Me, on which Cliff Richard was co-lead vocalist, reached the Top 10 in Britain. In June of the same year The Everly Brothers were reunited on stage at the Royal Albert Hall in London. They recorded for Mercury in Nashville, and continued to perform well into the new millennium and were admitted to the Rock and Roll Hall of Fame in 1986, and in 1997 received a Grammy Lifetime Achievement Award. They were inducted into the Country Music Hall of Fame in 2001.

Phil died on 3 January 2014 at the age of 75 due to problems with his lungs as a result of years of smoking, while Don, now 82, lives in Nashville with his third wife Adela Garza and even performed alongside Paul Simon at Nashville's Bridgestone Arena in June last year, when his Homeward Bound farewell tour stopped off there.

For tickets and further information about Walk Right Back visit the website.